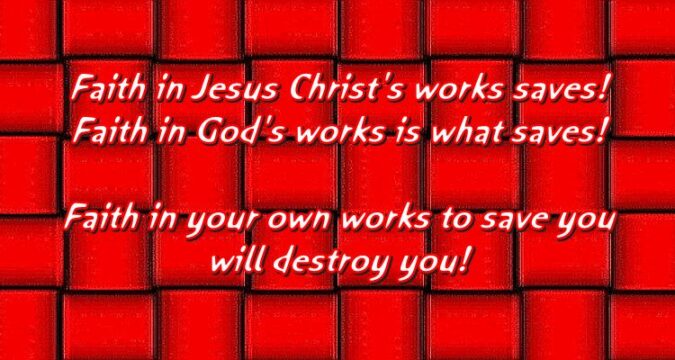 Faith in God’s works is what saves!

Faith in your own works to save you will destroy you!

Matthew 7:21-23 KJV
21  Not every one that saith unto me, Lord, Lord, shall enter into the kingdom of heaven; but he that doeth the will of my Father which is in heaven.
22  Many will say to me in that day, Lord, Lord, have we not prophesied in thy name? and in thy name have cast out devils? and in thy name done many wonderful works?
23  And then will I profess unto them, I never knew you: depart from me, ye that work iniquity.

Romans 4:2-8 KJV
2  For if Abraham were justified by works, he hath whereof to glory; but not before God.
3  For what saith the scripture? Abraham believed God, and it was counted unto him for righteousness.
4  Now to him that worketh is the reward not reckoned of grace, but of debt.
5  But to him that worketh not, but believeth on him that justifieth the ungodly, his faith is counted for righteousness.
6  Even as David also describeth the blessedness of the man, unto whom God imputeth righteousness without works,
7  Saying, Blessed are they whose iniquities are forgiven, and whose sins are covered.
8  Blessed is the man to whom the Lord will not impute sin.

Galatians 3:1-9 KJV
1  O foolish Galatians, who hath bewitched you, that ye should not obey the truth, before whose eyes Jesus Christ hath been evidently set forth, crucified among you?
2  This only would I learn of you, Received ye the Spirit by the works of the law, or by the hearing of faith?
3  Are ye so foolish? having begun in the Spirit, are ye now made perfect by the flesh?
4  Have ye suffered so many things in vain? if it be yet in vain.
5  He therefore that ministereth to you the Spirit, and worketh miracles among you, doeth he it by the works of the law, or by the hearing of faith?
6  Even as Abraham believed God, and it was accounted to him for righteousness.
7  Know ye therefore that they which are of faith, the same are the children of Abraham.
8  And the scripture, foreseeing that God would justify the heathen through faith, preached before the gospel unto Abraham, saying, In thee shall all nations be blessed.
9  So then they which be of faith are blessed with faithful Abraham.

Ephesians 2:8-9 KJV
8  For by grace are ye saved through faith; and that not of yourselves: it is the gift of God:
9  Not of works, lest any man should boast.

2 Timothy 1:8-9 KJV
8  Be not thou therefore ashamed of the testimony of our Lord, nor of me his prisoner: but be thou partaker of the afflictions of the gospel according to the power of God;
9  Who hath saved us, and called us with an holy calling, not according to our works, but according to his own purpose and grace, which was given us in Christ Jesus before the world began,

Titus 3:3-7 KJV
3  For we ourselves also were sometimes foolish, disobedient, deceived, serving divers lusts and pleasures, living in malice and envy, hateful, and hating one another.
4  But after that the kindness and love of God our Saviour toward man appeared,
5  Not by works of righteousness which we have done, but according to his mercy he saved us, by the washing of regeneration, and renewing of the Holy Ghost;
6  Which he shed on us abundantly through Jesus Christ our Saviour;
7  That being justified by his grace, we should be made heirs according to the hope of eternal life.

Hebrews 4:8-11 KJV
8  For if Jesus had given them rest, then would he not afterward have spoken of another day.
9  There remaineth therefore a rest to the people of God.
10  For he that is entered into his rest, he also hath ceased from his own works, as God did from his.
11  Let us labour therefore to enter into that rest, lest any man fall after the same example of unbelief.