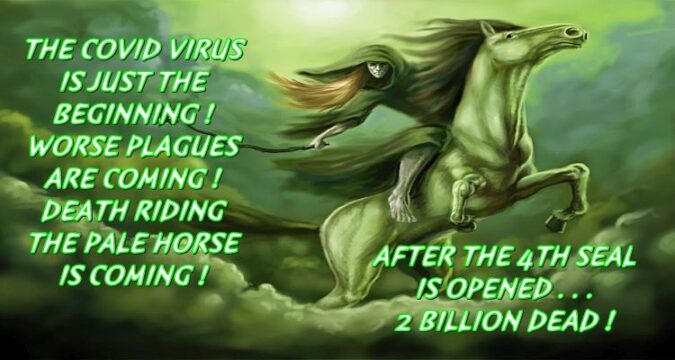 THE COVID VIRUS IS JUST THE BEGINNING FOLKS!
WORSE PLAGUES ARE COMING!
DEATH RIDING THE PALE HORSE IS COMING!

The COVID vaccine is NOT the mark of the beast!

AGAIN, I must say, from the evidence of the posts and comments I have witnessed, that not one person is addressing the VIRUS!
The VIRUS is the problem, not the vaccine!

As far as the vaccine changing a person’s DNA . . .

People all over the internet are LYING and DECEIVING people about the vaccine!
People are spreading fear and anxiety over this vaccine!

Jesus has NOT yet revealed to us what the mark of the beast is at this time!

The mark of the beast must comply with all these things:

1. It must be enforced by the antichrist and the false prophet THEMSELVES, but neither of them have even been revealed, yet!
2. It must be IN or ON your right hand or forehead!
3. You must have it to buy and sell ANYTHING, and this includes buying food, water, medicine, a house (or just owning a house), a car (or just owning a car), land, school, hospital visits, etc., etc.!
4. It must be openly and publicly associated with THE NAME AND THE NUMBER of the beast, the antichrist!
5. The person who receives this mark will ALREADY be worshiping the beast and his image!
6. If you refuse the mark of the beast the antichristians will cut off your head!

THE COVID VACCINE DOES NOT FIT ANY OF THIS CRITERIA!

Even IF the vaccine could change your body it CANNOT take Jesus from you!
The vaccine cannot cause Jesus to leave you nor forsake you!

Plus, if our DNA were GOD DNA then the vaccine could in no way change GOD’S DNA!
Nothing can change God’s DNA!

The only person who has God’s DNA is Jesus Christ, because Jesus Christ is God!
Therefore, since our HUMAN DNA is not GOD’S DNA then it can be changed, and even IF the vaccine changes our DNA it is NOT changing God Himself IN us!

It’s very sad to see so many people running with the idea that our human DNA is God’s DNA!
The only “DNA” in us that is from God is the blood and body of Jesus Christ, and the vaccine can NEVER change Jesus Christ, because Jesus Christ is God Almighty!

And, one last thing!

Do you honestly think this is the final plague?
This COVID VIRUS is a mild plague!
There are things coming that are far worse than the COVID VIRUS and VACCINE!
If you think this is bad just wait until you see what satan has up his sleeve next!

THERE ARE PLAGUES COMING THAT WILL MAKE THE COVID VIRUS AND VACCINE SEEM LIKE THE COMMON COLD!

IF YOU THINK THINGS ARE BAD NOW, WAIT UNTIL YOU WITNESS THE FOURTH SEAL BEING OPENED, AND THE PALE HORSE COMES ON THE SCENE!
A FOURTH PART OF THOSE IN THE EARTH WILL BE KILLED!

ALMOST 2 BILLION PEOPLE ARE GOING TO DIE WHEN THE 4TH SEAL IS OPENED!

WAKE UP CHRISTIANS, AND QUIT TAKING HOLD OF EVERY FALSE DOCTRINE YOU HEAR!

THE COVID VIRUS IS JUST THE BEGINNING FOLKS!

Revelation 6:7-8 KJV
7 And when he (Jesus Christ) had opened the fourth seal, I heard the voice of the fourth beast say, Come and see.
8 And I looked, and behold a pale horse: and his name that sat on him was Death, and Hell followed with him. And power was given unto them over the fourth part of the earth, to kill with sword, and with hunger, and with death, and with the beasts of the earth.

Revelation 13:16-18 KJV
1 And he (false prophet/second beast) causeth all, both small and great, rich and poor, free and bond, to receive a mark in their right hand, or in their foreheads:
17 And that no man might buy or sell, save he that had the mark, or the name of the beast, or the number of his name.
18 Here is wisdom. Let him that hath understanding count the number of the beast: for it is the number of a man; and his number is Six hundred threescore and six. (666)

Revelation 14:9-11 KJV
9 And the third angel followed them, saying with a loud voice, If any man worship the beast and his image, and receive his mark in his forehead, or in his hand,
10 The same shall drink of the wine of the wrath of God, which is poured out without mixture into the cup of his indignation; and he shall be tormented with fire and brimstone in the presence of the holy angels, and in the presence of the Lamb:
11 And the smoke of their torment ascendeth up for ever and ever: and they have no rest day nor night, who worship the beast and his image, and whosoever receiveth the mark of his name.

Revelation 15:2 KJV
2 And I saw as it were a sea of glass mingled with fire: and them that had gotten the victory over the beast, and over his image, and over his mark, and over the number of his name, stand on the sea of glass, having the harps of God.

Revelation 16:2 KJV
2 And the first (Angel) went, and poured out his vial upon the earth; and there fell a noisome and grievous sore upon the men which had the mark of the beast, and upon them which worshipped his image.

Revelation 19:20 KJV
20 And the beast was taken, and with him the false prophet that wrought miracles before him, with which he deceived them that had received the mark of the beast, and them that worshipped his image. These both were cast alive into a lake of fire burning with brimstone.

Revelation 20:4-6 KJV
4 And I saw thrones, and they sat upon them, and judgment was given unto them: and I saw the souls of them that were beheaded for the witness of Jesus, and for the word of God, and which had not worshipped the beast, neither his image, neither had received his mark upon their foreheads, or in their hands; and they lived and reigned with Christ a thousand years.
5 But the rest of the dead lived not again until the thousand years were finished. This is the first resurrection.
6 Blessed and holy is he that hath part in the first resurrection: on such the second death hath no power, but they shall be priests of God and of Christ, and shall reign with him a thousand years.