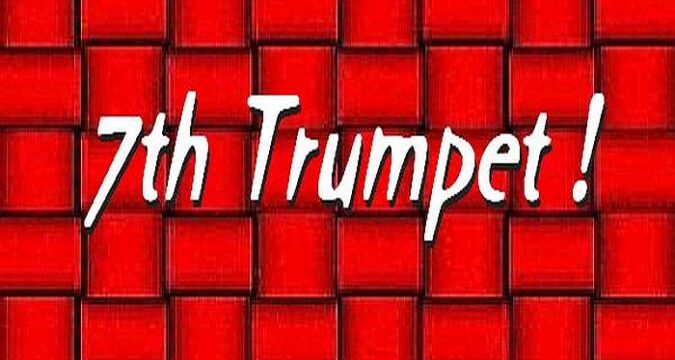 What happens when the 7th Trumpet sounds?

Revelation 10:7 KJV
7 But in the days of the voice of the seventh angel, when he shall begin to sound, the mystery of God should be finished, as he hath declared to his servants the prophets.

Revelation 11:15-19 KJV
15 And the seventh angel sounded; and there were great voices in heaven, saying, The kingdoms of this world are become the kingdoms of our Lord, and of his Christ; and he shall reign for ever and ever.
16 And the four and twenty elders, which sat before God on their seats, fell upon their faces, and worshipped God,
17 Saying, We give thee thanks, O Lord God Almighty, which art, and wast, and art to come; because thou hast taken to thee thy great power, and hast reigned.
18 And the nations were angry, and thy wrath is come, and the time of the dead, that they should be judged, and that thou shouldest give reward unto thy servants the prophets, and to the saints, and them that fear thy name, small and great; and shouldest destroy them which destroy the earth.
19 And the temple of God was opened in heaven, and there was seen in his temple the ark of his testament: and there were lightnings, and voices, and thunderings, and an earthquake, and great hail.

1 Corinthians 15:51-53 KJV
51 Behold, I shew you a mystery; We shall not all sleep, but WE SHALL ALL BE CHANGED,
52 In a moment, in the twinkling of an eye, AT THE LAST TRUMP (7th TRUMPET): for the trumpet shall sound, and the dead shall be raised incorruptible, and we shall be changed.
53 For this corruptible must put on incorruption, and this mortal must put on immortality.

1 Thessalonians 4:13-18 KJV
13 But I would not have you to be ignorant, brethren, concerning them which are asleep, that ye sorrow not, even as others which have no hope.
14 For if we believe that Jesus died and rose again, even so them also which sleep in Jesus will God bring with him.
15 For this we say unto you by the word of the Lord, that we which are alive and remain unto the coming of the Lord shall not prevent them which are asleep.
16 For THE LORD HIMSELF SHALL DESCEND FROM HEAVEN with a shout, with the voice of the archangel, and with the (LAST) trump of God (7th TRUMPET): and THE DEAD IN CHRIST SHALL RISE FIRST:
17 Then WE WHICH ARE ALIVE AND REMAIN SHALL BE CAUGHT UP TOGETHER WITH THEM IN THE CLOUDS, TO MEET THE LORD IN THE AIR: and so shall we ever be with the Lord.
18 Wherefore comfort one another with these words.

Luke 21:25-28 KJV
25 And there shall be signs in the sun, and in the moon, and in the stars; and upon the earth distress of nations, with perplexity; the sea and the waves roaring;
26 Men’s hearts failing them for fear, and for looking after those things which are coming on the earth: for the powers of heaven shall be shaken.
27 And then shall they see THE SON OF MAN COMING IN A CLOUD with power and great glory.
28 And when these things begin to come to pass, then LOOK UP, and LIFT UP YOUR HEADS; for your redemption draweth nigh.

Matthew 24:29-31 KJV
29 IMMEDIATELY AFTER THE TRIBULATION OF THOSE DAYS shall the sun be darkened, and the moon shall not give her light, and the stars shall fall from heaven, and the powers of the heavens shall be shaken:
30 And then shall appear the sign of the Son of man in heaven: and then shall all the tribes of the earth mourn, and THEY SHALL SEE THE SON OF MAN COMING IN THE CLOUDS OF HEAVEN with power and great glory.
31 And he shall send his angels with a great sound of a trumpet (LAST TRUMP) (7th TRUMPET), and THEY SHALL GATHER TOGETHER HIS ELECT from the four winds, from one end of heaven to the other.

Mark 13:24-27 KJV
24 But in those days, AFTER THAT TRIBULATION, the sun shall be darkened, and the moon shall not give her light,
25 And the stars of heaven shall fall, and the powers that are in heaven shall be shaken.
26 And then shall they see THE SON OF MAN COMING IN THE CLOUDS with great power and glory.
27 And then shall he send his angels, and (THEY) SHALL GATHER TOGETHER HIS ELECT from the four winds, from the uttermost part of the earth to the uttermost part of heaven.

The 7 vials of God’s wrath happen AFTER the 7th Trumpet sounds!
God’s wrath is poured out upon the antichristians for 45-75 days!
This time will be worse than the previous 7 year tribulation!
The Rapture is BEFORE the 7 vials are poured out!

Revelation 16:1-21 KJV
1 And I heard a great voice out of the temple saying to the seven angels, Go your ways, and pour out the vials of the wrath of God upon the earth.

2 And the first went, and poured out his vial upon the earth; and there fell a noisome and grievous sore upon the men which had the mark of the beast, and upon them which worshipped his image.

3 And the second angel poured out his vial upon the sea; and it became as the blood of a dead man: and every living soul died in the sea.

4 And the third angel poured out his vial upon the rivers and fountains of waters; and they became blood.
5 And I heard the angel of the waters say, Thou art righteous, O Lord, which art, and wast, and shalt be, because thou hast judged thus.
6 For they have shed the blood of saints and prophets, and thou hast given them blood to drink; for they are worthy.
7 And I heard another out of the altar say, Even so, Lord God Almighty, true and righteous are thy judgments.

8 And the fourth angel poured out his vial upon the sun; and power was given unto him to scorch men with fire.
9 And men were scorched with great heat, and blasphemed the name of God, which hath power over these plagues: and they repented not to give him glory.

10 And the fifth angel poured out his vial upon the seat of the beast; and his kingdom was full of darkness; and they gnawed their tongues for pain,
11 And blasphemed the God of heaven because of their pains and their sores, and repented not of their deeds.

12 And the sixth angel poured out his vial upon the great river Euphrates; and the water thereof was dried up, that the way of the kings of the east might be prepared.

17 And the seventh angel poured out his vial into the air; and there came a great voice out of the temple of heaven, from the throne, saying, It is done.
18 And there were voices, and thunders, and lightnings; and there was a great earthquake, such as was not since men were upon the earth, so mighty an earthquake, and so great.
19 And the great city was divided into three parts, and the cities of the nations fell: and great Babylon came in remembrance before God, to give unto her the cup of the wine of the fierceness of his wrath.
20 And every island fled away, and the mountains were not found.
21 And there fell upon men a great hail out of heaven, every stone about the weight of a talent: and men blasphemed God because of the plague of the hail; for the plague thereof was exceeding great.