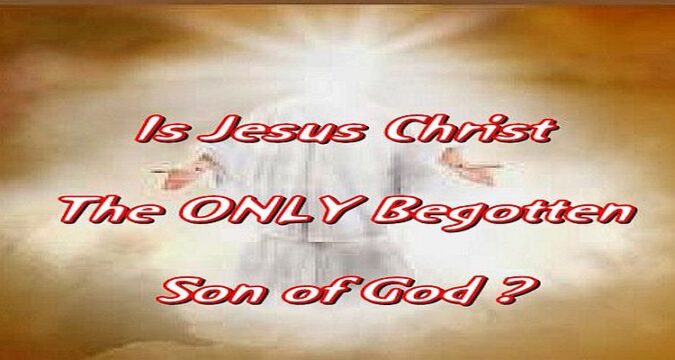 Is Jesus Christ The ONLY Begotten Son of God?

What do you say to someone who says Jesus is not the ONLY Begotten Son of God, and they quote references for Exodus 4:22, and Psalm 2:7, and Jeremiah 31:9???

Here is what those antichristians are saying!

The Lord God addressed Israel as his first born in Exodus 4:22
David is a begotten son of God Psalm 2:7
Ephraim is the first son of God according to Jeremiah 31:9

What do these scripture references say?

HOW DO WE REPLY TO THIS?

Exodus 4:22 KJV
22 And thou shalt say unto Pharaoh, Thus saith the LORD, Israel is my son, even my firstborn:

Psalms 2:7 KJV
7 I will declare the decree: the LORD hath said unto me, Thou art my Son; this day have I begotten thee.

Jeremiah 31:9 KJV
9 They shall come with weeping, and with supplications will I lead them: I will cause them to walk by the rivers of waters in a straight way, wherein they shall not stumble: for I am a father to Israel, and Ephraim is my firstborn.

JESUS GAVE THIS TO ME TODAY, AND JESUS REMINDED ME OF THESE SCRIPTURES TODAY!
Wednesday, September 01, 2021

CONCERNING PSALMS 2:7
This is PROPHECY of Jesus Christ!

Psalms 2:7 KJV
7 I will declare the decree: the LORD hath said unto me, Thou art my Son; this day have I begotten thee.

Acts 13:32-33 KJV
32  And we declare unto you glad tidings, how that the promise which was made unto the fathers,
33  God hath fulfilled the same unto us their children, in that he hath raised up Jesus again; as it is also written in the second psalm, Thou art my Son, this day have I begotten thee.

Hebrews 1:1-8 KJV
1  God, who at sundry times and in divers manners spake in time past unto the fathers by the prophets,
2  Hath in these last days spoken unto us by his Son, whom he hath appointed heir of all things, by whom also he made the worlds;
3  Who being the brightness of his glory, and the express image of his person, and upholding all things by the word of his power, when he had by himself purged our sins, sat down on the right hand of the Majesty on high;
4  Being made so much better than the angels, as he hath by inheritance obtained a more excellent name than they.
5  For unto which of the angels said he at any time, Thou art my Son, this day have I begotten thee? And again, I will be to him a Father, and he shall be to me a Son?
6  And again, when he bringeth in the firstbegotten into the world, he saith, And let all the angels of God worship him.
7  And of the angels he saith, Who maketh his angels spirits, and his ministers a flame of fire.
8  But unto the Son he saith, Thy throne, O God, is for ever and ever: a sceptre of righteousness is the sceptre of thy kingdom.

Hebrews 5:5-6 KJV
5  So also Christ glorified not himself to be made an high priest; but he that said unto him, Thou art my Son, to day have I begotten thee.
6  As he saith also in another place, Thou art a priest for ever after the order of Melchisedec.

As far as Jesus Christ’s flesh being inferior to God and angels . . .

It is true that flesh is lesser than Spirit.
Even so, Jesus died, and then Jesus raised HIMSELF back to life!
Now Jesus Christ’s flesh is GLORIFIED, and is as great as His Holy Spirit!

Psalms 8:4-5 KJV
4 What is man, that thou art mindful of him? and the son of man, that thou visitest him?
5 For thou hast made him a little lower than the angels, and hast crowned him with glory and honour.

Hebrews 2:5-9 KJV
5  For unto the angels hath he not put in subjection the world to come, whereof we speak.
6  But one in a certain place testified, saying, What is man, that thou art mindful of him? or the son of man, that thou visitest him?
7  Thou madest him a little lower than the angels; thou crownedst him with glory and honour, and didst set him over the works of thy hands:
8  Thou hast put all things in subjection under his feet. For in that he put all in subjection under him, he left nothing that is not put under him. But now we see not yet all things put under him.
9  But we see Jesus, who was made a little lower than the angels for the suffering of death, crowned with glory and honour; that he by the grace of God should taste death for every man.

Philippians 2:5-11 KJV
5  Let this mind be in you, which was also in Christ Jesus:
6  Who, being in the form of God, thought it not robbery to be equal with God:
7  But made himself of no reputation, and took upon him the form of a servant, and was made in the likeness of men:
8  And being found in fashion as a man, he humbled himself, and became obedient unto death, even the death of the cross.
9  Wherefore God also hath highly exalted him, and given him a name which is above every name:
10  That at the name of Jesus every knee should bow, of things in heaven, and things in earth, and things under the earth;
11  And that every tongue should confess that Jesus Christ is Lord, to the glory of God the Father.

2 Corinthians 4:3-6 KJV
3  But if our gospel be hid, it is hid to them that are lost:
4  In whom the god of this world hath blinded the minds of them which believe not, lest the light of the glorious gospel of Christ, who is the image of God, should shine unto them.
5  For we preach not ourselves, but Christ Jesus the Lord; and ourselves your servants for Jesus’ sake.
6  For God, who commanded the light to shine out of darkness, hath shined in our hearts, to give the light of the knowledge of the glory of God in the face of Jesus Christ.

Colossians 1:12-20 KJV
12  Giving thanks unto the Father, which hath made us meet to be partakers of the inheritance of the saints in light:
13  Who hath delivered us from the power of darkness, and hath translated us into the kingdom of his dear Son:
14  In whom we have redemption through his blood, even the forgiveness of sins:
15  Who is the image of the invisible God, the firstborn of every creature:
16  For by him were all things created, that are in heaven, and that are in earth, visible and invisible, whether they be thrones, or dominions, or principalities, or powers: all things were created by him, and for him:
17  And he is before all things, and by him all things consist.
18  And he is the head of the body, the church: who is the beginning, the firstborn from the dead; that in all things he might have the preeminence.
19  For it pleased the Father that in him should all fulness dwell;
20  And, having made peace through the blood of his cross, by him to reconcile all things unto himself; by him, I say, whether they be things in earth, or things in heaven.