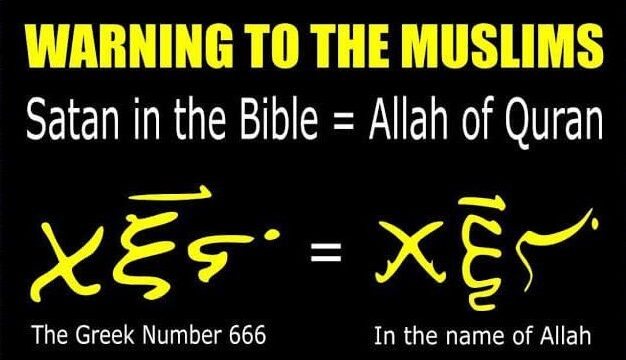 The Mark Of The Beast: 666 in the Name of Allah

Therefore, allah is NOT God!

allah is NOT Jehovah Yahweh!

ALLAH IS A LIAR AND A DECEIVER!
ALLAH IS ANTICHRISTIAN!

Anyone who lies and denies the Father and the Son is an antichristian!

Allah lies and denies the Father and the Son!

The unholy quran states in verse 6:101
Muhammad Sarwar: How could the One Who is the Originator of the heavens and the earth and who has no companion, have a son? He created all things and has absolute knowledge of all things.

The unholy quran states in verse 17:111
Mohsin Khan: And say: “All the praises and thanks be to Allah, Who has not begotten a son (nor an offspring), and Who has no partner in (His) Dominion, nor He is low to have a Wali (helper, protector or supporter). And magnify Him with all the magnificence, [Allahu-Akbar (Allah is the Most Great)].”

The Holy Bible makes it very clear that ANYONE who lies and denies the Father and the Son is an antichristian!

Yeshua Jesus is the NAME above ALL names!

Philippians 2:9-11 KJV
9  Wherefore God also hath highly exalted him (Jesus Christ), and given him a NAME which is above every name:
10  That at the NAME of Jesus every knee should bow, of things in heaven, and things in earth, and things under the earth;
11  And that every tongue should confess that Jesus Christ is Lord (GOD), to the glory of God the Father.

allah denies that Jesus Christ died on the cross!

It is antichristian to say Jesus Christ did not die!

The unholy quran states in verse Sura 4:157-158
Yusuf Ali: That they said (in boast), “We killed Christ Jesus the son of Mary, the Messenger of Allah”—but they killed him not, nor crucified him, but so it was made to appear to them, and those who differ therein are full of doubts, with no (certain) knowledge, but only conjecture to follow, for of a surety they killed him not—nay, Allah raised him up unto Himself; and Allah is Exalted in Power, Wise.”

The Holy Bible makes it very clear that Jesus died on the cross!

1 Corinthians 1:18 KJV
18  For the preaching of the cross (Jesus Christ dying) is to them that perish foolishness; but unto us which are saved (Christians) it is the power of God.

Philippians 2:8 KJV
8  And (Jesus Christ) being found in fashion as a man, he humbled himself, and became obedient unto death, even the death of the cross.

allah denies Jesus raised HIMSELF from the dead!

This is evidenced by allah denying Jesus Christ died!

Jesus Christ Raised Himself From The Dead!

Only God can give LIFE to His Own Flesh!

John 2:18-21 KJV
18  Then answered the Jews and said unto him (Jesus Christ), What sign shewest thou unto us, seeing that thou doest these things?
19  Jesus answered and said unto them, DESTROY THIS TEMPLE AND IN THREE DAYS I WILL RAISE IT UP.
20  Then said the Jews, Forty and six years was this temple in building, and wilt thou rear it up in three days?
21  BUT HE (JESUS CHRIST) SPAKE OF THE TEMPLE OF HIS BODY.

Revelation 13:16-18 KJV
1 And he (false prophet/second beast) causeth all, both small and great, rich and poor, free and bond, to receive a mark in their right hand, or in their foreheads:
17 And that no man might buy or sell, save he that had the mark, or the name of the beast, or the number of his name.
18 Here is wisdom. Let him that hath understanding count the number of the beast: for it is the number of a man; and his number is Six hundred threescore and six (666).

Revelation 14:9-11 KJV
9 And the third angel followed them, saying with a loud voice, If any man worship the beast and his image, and receive his mark in his forehead, or in his hand,
10 The same shall drink of the wine of the wrath of God, which is poured out without mixture into the cup of his indignation; and he shall be tormented with fire and brimstone in the presence of the holy angels, and in the presence of the Lamb:
11 And the smoke of their torment ascendeth up for ever and ever: and they have no rest day nor night, who worship the beast and his image, and whosoever receiveth the mark of his name.

Revelation 15:2 KJV
2 And I saw as it were a sea of glass mingled with fire: and them that had gotten the victory over the beast, and over his image, and over his mark, and over the number of his name, stand on the sea of glass, having the harps of God.

Revelation 16:2 KJV
2 And the first went, and poured out his vial upon the earth; and there fell a noisome and grievous sore upon the men which had the mark of the beast, and upon them which worshipped his image.

Revelation 19:20 KJV
20 And the beast was taken, and with him the false prophet that wrought miracles before him, with which he deceived them that had received the mark of the beast, and them that worshipped his image. These both were cast alive into a lake of fire burning with brimstone.

Revelation 20:4-6 KJV
4 And I saw thrones, and they sat upon them, and judgment was given unto them: and I saw the souls of them that were beheaded for the witness of Jesus, and for the word of God, and which had not worshipped the beast, neither his image, neither had received his mark upon their foreheads, or in their hands; and they lived and reigned with Christ a thousand years.
5 But the rest of the dead lived not again until the thousand years were finished. This is the first resurrection.
6 Blessed and holy is he that hath part in the first resurrection: on such the second death hath no power, but they shall be priests of God and of Christ, and shall reign with him a thousand years.