The Holy Bible makes it very clear that Jesus Christ died for our sins! 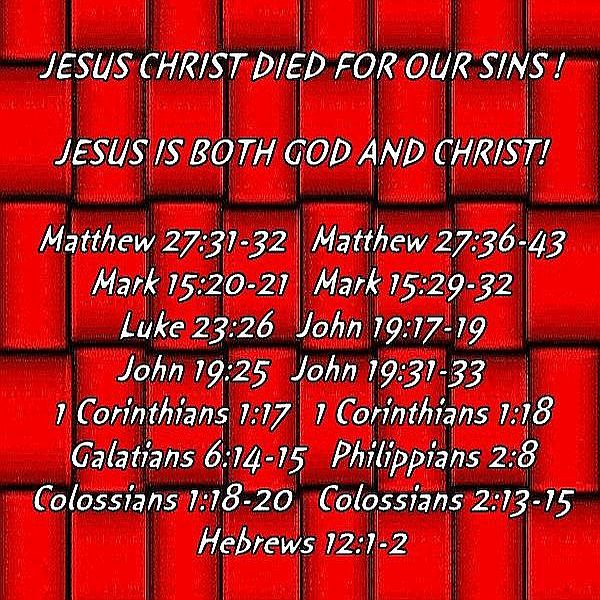 JESUS CHRIST DIED FOR OUR SINS !

THIS MEANS JESUS IS BOTH GOD AND CHRIST!

Matthew 27:31-32 KJV
31 And after that they had mocked him, they took the robe off from him, and put his own raiment on him, and led him away to crucify him.
32 And as they came out, they found a man of Cyrene, Simon by name: him they compelled to bear his cross.

Matthew 27:36-43 KJV
36 And sitting down they watched him there;
37 And set up over his head his accusation written, THIS IS JESUS THE KING OF THE JEWS.
38 Then were there two thieves crucified with him, one on the right hand, and another on the left.
39 And they that passed by reviled him, wagging their heads,
40 And saying, Thou that destroyest the temple, and buildest it in three days, save thyself. If thou be the Son of God, come down from the cross.
41 Likewise also the chief priests mocking him, with the scribes and elders, said,
42 He saved others; himself he cannot save. If he be the King of Israel, let him now come down from the cross, and we will believe him.
43 He trusted in God; let him deliver him now, if he will have him: for he said, I am the Son of God.

Mark 15:20-21 KJV
20 And when they had mocked him, they took off the purple from him, and put his own clothes on him, and led him out to crucify him.
21 And they compel one Simon a Cyrenian, who passed by, coming out of the country, the father of Alexander and Rufus, to bear his cross.

Mark 15:29-32 KJV
29 And they that passed by railed on him, wagging their heads, and saying, Ah, thou that destroyest the temple, and buildest it in three days,
30 Save thyself, and come down from the cross.
31 Likewise also the chief priests mocking said among themselves with the scribes, He saved others; himself he cannot save.
32 Let Christ the King of Israel descend now from the cross, that we may see and believe. And they that were crucified with him reviled him.

Luke 23:26 KJV
26 And as they led him away, they laid hold upon one Simon, a Cyrenian, coming out of the country, and on him they laid the cross, that he might bear it after Jesus.

John 19:17-19 KJV
17 And he bearing his cross went forth into a place called the place of a skull, which is called in the Hebrew Golgotha:
18 Where they crucified him, and two other with him, on either side one, and Jesus in the midst.
19 And Pilate wrote a title, and put it on the cross. And the writing was, JESUS OF NAZARETH THE KING OF THE JEWS.

John 19:25 KJV
25 Now there stood by the cross of Jesus his mother, and his mother's sister, Mary the wife of Cleophas, and Mary Magdalene.

John 19:31-33 KJV
31 The Jews therefore, because it was the preparation, that the bodies should not remain upon the cross on the sabbath day, (for that sabbath day was an high day,) besought Pilate that their legs might be broken, and that they might be taken away.
32 Then came the soldiers, and brake the legs of the first, and of the other which was crucified with him.
33 But when they came to Jesus, and saw that he was dead already, they brake not his legs:

1 Corinthians 1:17 KJV
17 For Christ sent me not to baptize, but to preach the gospel: not with wisdom of words, lest the cross of Christ should be made of none effect.

1 Corinthians 1:18 KJV
18 For the preaching of the cross is to them that perish foolishness; but unto us which are saved it is the power of God.

Galatians 6:14-15 KJV
14 But God forbid that I should glory, save in the cross of our Lord Jesus Christ, by whom the world is crucified unto me, and I unto the world.
15 For in Christ Jesus neither circumcision availeth any thing, nor uncircumcision, but a new creature.

Philippians 2:8 KJV
8 And being found in fashion as a man, he humbled himself, and became obedient unto death, even the death of the cross.

Colossians 1:18-20 KJV
18 And he is the head of the body, the church: who is the beginning, the firstborn from the dead; that in all things he might have the preeminence.
19 For it pleased the Father that in him should all fulness dwell;
20 And, having made peace through the blood of his cross, by him to reconcile all things unto himself; by him, I say, whether they be things in earth, or things in heaven.

Colossians 2:13-15 KJV
13 And you, being dead in your sins and the uncircumcision of your flesh, hath he quickened together with him, having forgiven you all trespasses;
14 Blotting out the handwriting of ordinances that was against us, which was contrary to us, and took it out of the way, nailing it to his cross;
15 And having spoiled principalities and powers, he made a shew of them openly, triumphing over them in it.

Hebrews 12:1-2 KJV
1 Wherefore seeing we also are compassed about with so great a cloud of witnesses, let us lay aside every weight, and the sin which doth so easily beset us, and let us run with patience the race that is set before us,
2 Looking unto Jesus the author and finisher of our faith; who for the joy that was set before him endured the cross, despising the shame, and is set down at the right hand of the throne of God.

How to Become Born Again – JESUS IS GOD TV